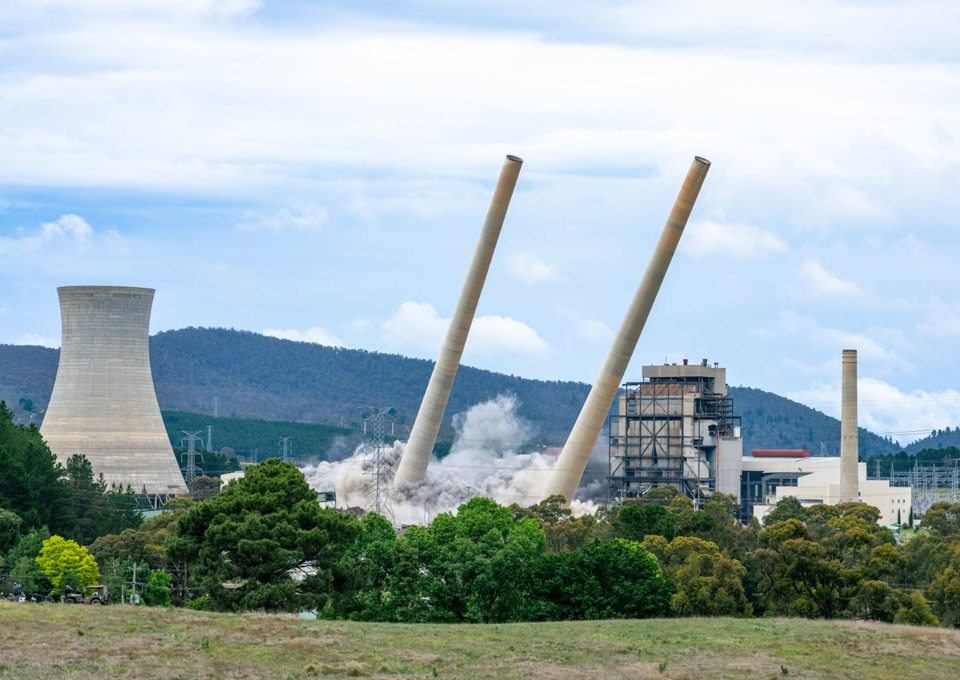 WALLERAWANG, NSW – 24 November, 2021. Greenspot and its decommissioning and demolition partner Liberty Industrial carried out a controlled explosive demolition event at Wallerawang Power Station near Lithgow this morning. The demolition of major structures marks a significant step towards transforming a decommissioned power station into a rejuvenated multi-use area comprising a sustainable energy and circular economy hub at its core.

Two large chimney stacks and one of the boiler houses were demolished. Greenspot, a privately owned NSW group, successfully acquired the old Wallerawang Power Station in September 2020 after it had been closed by the former owner in 2014. The acquisition moved forward after Greenspot presented an alternative view for the site that required only a partial demolition together with plans to repurpose much of the existing infrastructure.

“I am a big believer in beneficial reuse of structures and materials wherever possible”, said Greenspot Founder Neil Schembri. “The Wallerawang site gives Greenspot a massive opportunity to work with Traditional Custodians, community members and other stakeholders on a broad range of opportunities to deliver long term jobs and many other benefits for the community. We believe that what we do will have a ripple effect in the region more broadly.”

Leading up to the demolition, Greenspot hosted a three-night lightshow and tribute event for the local community to honour the legacy of the Wallerawang Power Station and the people who have made the site special for a period spanning seven decades. The event served as a celebration of both the past and the future.

Greenspot is currently well advanced with plans to develop a large grid-scale battery on the Wallerawang site which has the potential to accelerate the introduction of increased renewable energy generation in NSW. That transition marks the beginning of the group’s plans, however the site is 620 hectares and can accommodate much more than the battery.

“This is a large site with access to significant energy, water, transport and digital infrastructure”, said Greenspot CEO Brett Hawkins. “These are core enablers of business development that can attract investment and jobs, ultimately transforming the site into a model multi-use area that attracts a range of businesses and also residential, tourism, sport and recreational opportunities.”